Social media is a dynamic tool that can be used for social activism, movie promotions, business connections, or to simply announce to your followers and friends that you are having a bad day. As the positive and negative impacts of social media are being debated, it is undeniable that it has become an integral part of our lives. While it benefits different people in different ways, social media platforms can provide an especially excellent space for self-expression to AAC users.

Here’s a look at some of the benefits of social media for AAC users:

Several AAC users are keen on using social media just like their peers do.Young adults, especially, are inclined to know what their friends are up to. They want to comment on their friend’s new profile picture or Instagram story. The thrill of being able to participate in the Facebook, Twitter, and Instagram conversations their friends are having incentivises AAC use for them.

The compatibility of high tech AAC systems with messaging platforms has also been a major motivator. AAC users can use the keyboard or use symbols to create messages that can be instantly shared with friends and family.

Social media has evolved into a place where important discussions about politics, economy, human rights, and other key social issues take place.  AAC gives users an opportunity to be part of the social discourse. It allows them to be an active participant in society by letting them register their opinions. It also enables them to become more aware of their social responsibilities which helps them become responsible global citizens.

It can get difficult for people with complex communication needs to stay connected to their friends and family. They may miss out on opportunities to engage in conversations due to their speech and language difficulties. People with physical disabilities too may not be able to go out and meet their friends as often as their peers. Social media helps such individuals foster and maintain their relationships by connecting virtually.

People with developmental disabilities may have social communication problems which can affect the quality of face-to-face interactions. However, with social media, they may not feel as anxious about saying things that may be considered socially inappropriate. Since they need not worry about picking up social cues, or controlling their responses, they can feel less inhibited while interacting with others.

Support groups on social media can be a major help for individuals with communication deficits. For those with accompanying disorders, these groups can be valuable resources for understanding their condition. Although suggestions given by non-experts are frowned upon and cannot be a substitute for expert advice, social media groups can offer emotional and psychological support. Adults with communication difficulties can also find suitable caregivers and get opinions on affordable healthcare plans.

Social media messages are informal and forgiving on spellings and syntaxes. This relieves AAC users with language difficulties of the pressure to construct grammatically accurate sentences. Face-face interaction can also be difficult for those with processing delays. With social media, they get enough time to form their responses without any pressure.

Social media can make adolescent and adult AAC users feel included. Communication deficits can make them feel alienated and they can become reclusive. Social media gives them a way to engage with others. Since that’s the way others around them seem to be communicating for the most part, AAC users can feel like they belong while using social media.

Increased social media visibility of people with disabilities helps them take control of their representation in media and society at large. It helps them present a more accurate picture of their various facets, instead of being defined by their disabilities.

People with complex communication needs may not be able to speak. But they can express their humour with memes, convey their protest with hashtags, and show off their multidimensional personalities on social media. AAC users regularly engaging in social media helps in educating others about their rights. It can also spread awareness about disabilities and promote acceptance.

Although social media has several advantages, it has its pitfalls that we must carefully consider. It can discourage real-life engagement and result in a lack of personal connection with others. Catfishing and other cybersecurity threats also need to be managed to avoid being duped. AAC users must have necessary privacy settings to avoid having to deal with vile online comments. Since young AAC users may be exposed to more social media risks, parents must ascertain if they are ready for it. They may also have to regularly monitor their social media usage patterns, at least at the outset, to buffer against or prevent negative experiences. Caregivers must enable young AAC users to engage on social media with caution and a bias for self care.

Discreet use of social media can provide AAC users a channel for expressing themselves. It can also give them more independence in communication. So, AAC users must be educated and supported so that they can make their voice heard in issues that matter to them. 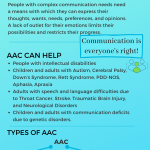 What is AAC(Augmentative and Alternative Communication)? : A Detailed View 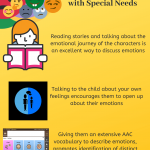 Tips for Shared Reading with an AAC System