Cerebral Palsy is a brain disorder that causes motor disability. Read this post to learn about causes, diagnosis, and how assistive technology for Cerebral Palsy can help overcome difficulties with communication and movement.

What is Cerebral Palsy?

Cerebral Palsy (CP) is a group of neurological disorders that affect movement, balance, and posture of individuals. The term ‘Cerebral’ refers to the brain and ‘Palsy’ refers to impairment of motion. CP is the most common condition causing motor impairments in children. People with Cerebral Palsy can also experience communication challenges along with difficulties in thinking, feeling, and learning.

The following risk factors are reasons that can increase the chances of CP. Presence of risk factors does not mean that a child will have CP

Studies have found that the prevalence of CP was higher among infants of low birth weight compared to those of normal birth weight.

According to researchers, babies born before the 37th week of pregnancy have a greater chance of having CP.

Multiple births such as the birth of twins or triplets can increase the chance of CP.  The increase in risk may be because children born from multiple pregnancy tend to be born early or at low birth weight.

Infection of the placental membranes (chorioamnionitis), blood infection in the mother or fever during labor can increase the risk of CP in children. Chickenpox, Rubella, and Cytomegalovirus are some of the viral infections linked to CP.

The risk factors for Acquired CP are

Diagnosis of Cerebral Palsy generally happens during the first or second year after birth. But if the child has mild symptoms, the diagnosis can be difficult and doesn’t happen until the child is older. Early diagnosis ensures that the child receives the necessary support. Therefore, it is important to be aware of the common signs of CP.
Doctors generally track movement goals in a child from birth to five years. These goals include rolling over, sitting up, standing, and walking. Delay in reaching these milestones is an early sign of Cerebral Palsy. It is worth noting that many children without CP also can have some of these signs. So, it is better to consult a medical professional if you have concerns.

The four main types of CP are

This is the most common type of CP affecting about 80% of people with CP. People with spastic CP have increased muscle tone which results in muscle stiffness. The stiffness may affect only one side of a person’s body, only the legs, or all four limbs, the trunk, and the face. People with spastic CP can have other developmental disabilities such as intellectual disability or problems with vision, hearing, or speech.

Difficulties with controlling the movement of hands, arms, feet, and legs are seen in people with Dyskinetic CP. Dyskinetic CP can also affect the face and tongue of the individual.

Ataxic CP is characterized by problems with balance and coordination. People with this condition can walk unsteadily. They also can have trouble controlling their hands when reaching for something.

Spastic-dyskinetic CP is The most common type of mixed CP. Those with mixed CP have symptoms of more than one type of CP.

The common types of treatment for CP are

Physical therapy involves exercises and activities that can maintain or improve muscle strength, balance, and movement. The child learns skills such as sitting, walking, or using a wheelchair. The child also learns to do everyday activities such as dressing and going to school as part of occupational therapy.

The child learns to speak more clearly. The child also learns new ways to communicate, such as by using sign language or an AAC system.

These include braces, splints, wheelchairs, rolling walkers, and powered scooters, Velcro-fastened shoes, and crutches. Communication apps and devices can also help children with CP in their social interactions

Medications can help in relaxing stiff or overactive muscles and reduce involuntary movement.

These treatments help people with CP move better, thereby improving their lives. Equipping them with an AAC system enhances their communication skills and consequently boosts their self-esteem. As Dipak Ghosh, Disability Rights Activist, has shown us, people with CP can defy all odds and live purposeful lives with a little help from assistive technology. 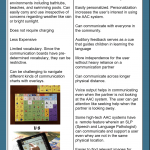 High Tech and Low Tech AAC: How to Effectively use both
AAC and Smart Assistants: A Productive Partnership
AAC Apps for Adults with Acquired Communication Disorders