Communication is a basic right. Believing in the prerequisites for AAC myth can potentially derail a child’s path to autonomous communication and literacy. Imagine being denied your basic rights because somebody chose to set illogical, unscientific standards for eligibility. It’s not fun, is it? In the same way, by paying heed to myths, we may very well be robbing children of an opportunity to realize their full potential.

The Myth and its Repercussions

Believing in the myth of prerequisites for AAC has led to several children with cognitive disabilities being excluded from AAC interventions. WIthout AAC, the language skills of children can significantly fall behind. Considering how language is key to cognitive development, a lack of AAC intervention can put children at a developmental disadvantage. (Rice & Kemper, 1984).

Moreover, children having severe sensori-motor disabilities will not be able to demonstrate their cognition without a means to communicate. So, we cannot make AAC intervention contingent on evidence of cognitive abilities.

Debunking the Myth One Prerequisite Skill at a Time

1. Must the child understand cause and effect?

Understanding cause and effect is essential for communication. When children see the connection between their communication attempts and how they help in getting their needs met, they communicate more.

For example, when a child taps the ‘cookie’ button and gets a cookie, it helps them understand the concept of cause and effect.

2. Must the child understand that a symbol represents an object?

Understanding that a picture represents a certain object may be difficult for some children. However, when a child taps the ‘chips’ button and receives chips as a reinforcer, they soon begin to make the connection. Similarly, when the child taps the wrong button, they don’t receive the expected item as a reinforcer. This helps them understand which pictures represent which objects.

Speech Generating Devices (SGDs) and AAC apps provide auditory feedback in addition to pictures. When the AAC system speaks out the tapped word, it makes it easier for the child to make sense of the visual representation.

3. Must the child understand language to use AAC?

4. Must the child  have a certain set of motor skills?

Technological developments in recent years have helped break this myth of prerequisites. Lack of adequate motor skills cannot be cited as a reason to exclude a child from AAC intervention. With eye gaze systems and advanced switches, children are able to take advantage of AAC systems overcoming deficits in motor skills.

5. Must the child demonstrate interest to communicate through AAC?

Most of us may refrain from a task if it is difficult for us to do. When the same task is made simpler, we are more likely to have the inclination and confidence to do it. Similarly, communication may be difficult for some children due to oral motor difficulties or difficulties with auditory processing. Giving them a visual way to express their ideas can be a shot in the arm for such communicators. They may end up showing more interest in communicating because the cognitive load is less with AAC.

Hope you find this blog about the myth of prerequisites for AAC useful. Please share your suggestions and feedback in the comment section below. 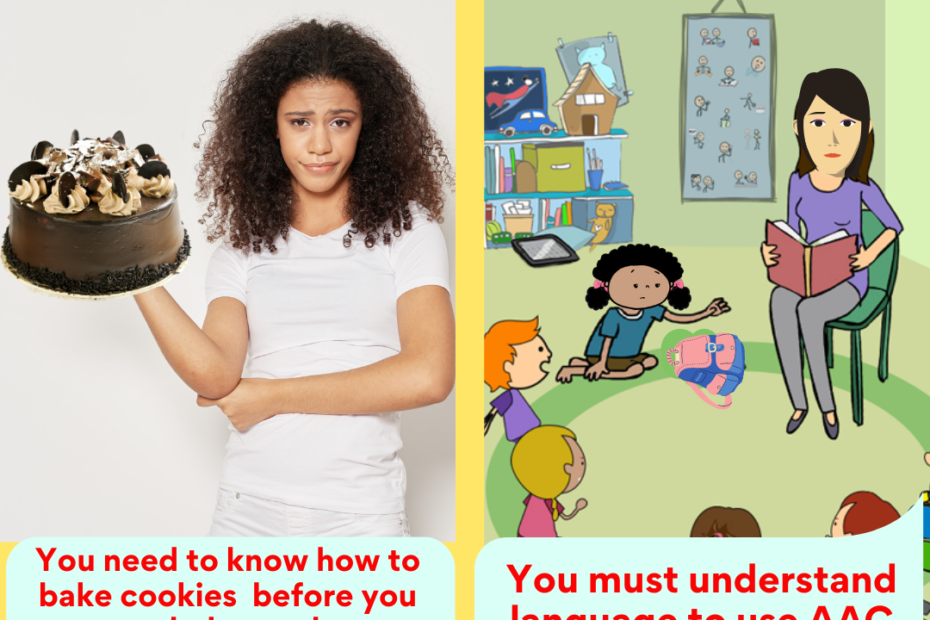